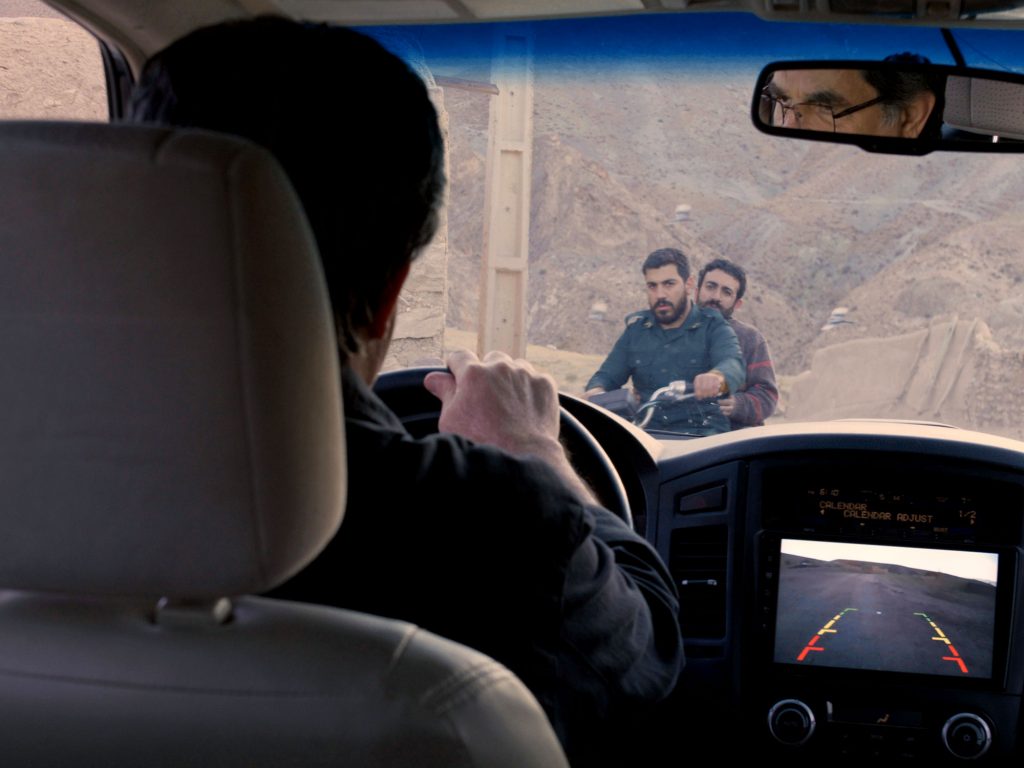 Mere weeks separated the world premiere of Jafar Panahi’s latest film No Bears from his latest arrest over accusations of propaganda against the Iranian state. The filmmaker – first imprisoned in 2010 on the same charges – has been banned from making movies, writing screenplays and speaking with any Iranian or foreign media for the last 10 years, with another 10 outstanding on his sentence.

This has not stopped him in that time for he has produced a whopping five features, including 2011’s seminal This Is Not a Film and the 2015 Golden Bear-winner Taxi Tehran. Panahi’s literal and metaphorical entrapment feeds into the metatextuality of No Bears. Here, the filmmaker plays himself, but all else around him is a mixture of fact and fiction, with two sets of lovers placed against the political structures that have forced the Iranian master into a stateless exile. The first pair comprises a contemporary Romeo and Juliet kept apart by the outdated rituals of the small community that acts as the director’s refuge; the second is a pair of long-term partners whose relationship runs parallel to their fight against Iran’s authoritarian regime.

Diaspora is defined by Panahi by this very sense of statelessness: “He feels trapped, with no future, no freedom and no job,” the director tells his fictional assistant (played by his real-life sound designer Reza Heydari), a simply put yet beautifully layered encapsulation of this particular kind of claustrophobic despair.

No Bears often echoes Abbas Kiarostami’s forlorn 1997 film Taste of Cherry, with a car recklessly driving through the arid lands of the Iranian desert to carry out a nihilistic desire to flirt with self-destruction. Yet, Panahi – who started his career under Kiarostami’s wing – bypasses the melancholia often employed by his mentor in favour of tapping into a seam of humour that permeates most of his films. Life, as they say, goes on, and No Bears observes people toiling away at existing while Panahi wrestles with matters existential.

There are no bears in No Bears. The animal stands in for the way in which control is often established in society through the perpetuation of Machiavellian myths. “Stories are made up to scare us. Our fear empowers others,” a man tensely whispers to Panahi as they near the heavilypoliced Iranian borders. The same ground that once bore the sturdy foundation of a loving home now stands eternally scarred by the searing cuts of imaginary lines, an irreparable fissure that – in Panahi’s heartfelt visual diary – cruelly severs the frail umbilical cord to the motherland.

Little White Lies is committed to championing great movies and the talented people who make them.

By becoming a member you can support our independent journalism and receive exclusive prints, essays, film recommendations and more.

A new one from the incarcerated Iranian director Jafar Panahi. Need we say more?
4

An inspired exercise in autofiction that is as illuminating as it is witty.
4


This is Panahian social commentary at its finest.
4

The post No Bears appeared first on Little White Lies.

Controversy Over Ramcharitmanas Ploy by SP to Stay Relevant: UP BJP Chief